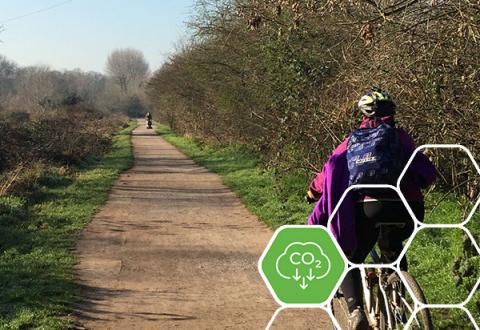 The damaging impact of climate change is already being felt today, including more extreme weather events, damage to sensitive ecosystems, changing patterns of water availability and its associated effects on crops.

A report by the Intergovernmental Panel on Climate Change (IPCC) in 2018 concluded global greenhouse gas (GHG) emissions need to reach net zero by around 2050 to keep the world's temperature rise below 1.5°C to minimise damaging climate impacts on human and natural systems.

In 2019, the UK became the first major economy in the world to commit to having net-zero GHG emissions by 2050. On 10th July 2019, Merton Council declared a Climate Emergency and committed to working towards making the borough of Merton a carbon neutral borough by 2050, and to make Merton Council carbon neutral by 2030.

As a large proportion of emissions within the borough come from the buildings we work in and the vehicles we drive, the majority of which are outside the Council's direct control, everyone has a crucial role to play in decarbonising Merton.

The IPCC found that continued emission of greenhouse gases will cause further warming and long-lasting changes in every component of the climate system, increasing the chance of severe and irreversible impacts on people and ecosystems.

We are likely to see continued sea level rise, more extreme weather events and species extinction, reduced water and food security and increased ill-health, conflict and inequality. The risks of abrupt or irreversible changes will increase as the magnitude of the warming increases.

As well as playing our part in reducing global climate change, taking action now to reduce emissions will improve our own health and well-being, resilience and local economy.

We envisage a carbon-neutral Merton will have good public transport and active travel links for walking and cycling, energy-efficient and well-ventilated homes and offices, a significant proportion of locally generated electricity from solar panels installed on our rooftops, and increased tree coverage and green spaces.

From more 600 responses, there was overwhelming support for strong action to reduce the impact of climate change, with around 90% feeling their actions can make a difference as part of a wider community effort.

Community engagement and action was a key theme in all areas, including 74% of respondents saying they would volunteer to plant more trees and strong support to empower communities to create car-free areas.

However many highlighted the challenges of accessing the right information and support for such projects, as well as the cost of going green.

To reduce carbon emissions in the borough, and work towards making the borough of Merton a carbon neutral borough by 2050, we will:

Everyone will need to work together to make adjustments to their daily lives in order to secure a better future for all.

The following sets out some of the key ways you can play your part in decarbonising the borough of Merton.

Buildings and energy - You can help by:

Transport - You can help by:

Waste and products - You can help by:

Financial investments - You can help by:

Green spaces - You can help by:

A climate emergency was declared in Merton in 2019, when a target was also set to make the borough carbon neutral by 2050. To help meet this ambitious declaration, a Climate Emergency Working Group has been put in place to develop a Climate Action Plan.

The Working Group is formed of a range of individuals who have offered their time, experience and specific knowledge of climate change issues to make up a diverse panel covering residents, businesses and services in the borough.

Among the 14 members is Tom Walsh, who lives in Colliers Wood and co-founded the Sustainable Merton environmental charity in 2007. Now aged 64, he has been a green campaigner for most of his adult life and says it is a "massive relief" that the world is finally taking action on climate change.

"If the world fails to change in the next 10 to 12 years, then events will occur that are not returnable – such as the loss of ice around Antarctica and Greenland which will see water and sea levels rising, threatening 800 million coastal dwellers around the globe.

"I trained in applied biology and when I was at college, our tutors said climate change wouldn't affect us in our lifetime. But they were wrong and we have lost a lot of time," he said.

At Sustainable Merton, Tom has worked with residents and groups across the borough discussing all aspects of climate change and has been involved with numerous environmental projects. These include working with 15 Merton schools showing young residents where their food comes from and how to grow their own, and helping run the Dig Merton scheme where vacant green spaces were planted with fruit, vegetables and flowers.

He also highlighted the on-going success of Sustainable Merton's Mitcham Community Orchard, where 200 residents and 12 partner organisations have worked together to transform a derelict area of spare land in Field Gate Lane into an award-winning orchard with 30 different varieties of fruit trees, seven raised beds, ponds, soft-fruits and a wild garden.

Tom's wealth of experience as an environmental pioneer will help shape the forthcoming Climate Action Plan for Merton now being prepared by the Working Group. They have agreed to structure tasks under the following themes:

As co-ordinator of the Products and Waste theme, Tom says a strategy will be developed by Spring. Merton Borough Council is aiming to become carbon neutral as an organisation by 2030, with the borough as a whole to follow 20 years later.

"It is very encouraging to realise that the whole world is mobilising on climate change. I have waited 30 years for action like this to be taken," Tom added.

Teenager Zaqiya Cajee has become an environmental activist after setting up her 'SwopItUp' clothing exchange for young people,

which not only gives them the chance to update their wardrobe for free, but enables them to understand how their choices impact the environment.

SwopItUp, run in schools by teenagers and for teenagers, sees clothes dropped off by pupils during a 'DropToSwop' week in return for tokens which they exchange for clothing pre-loved by fellow students at a school SwopItUp event.

Zaqiya, aged 17 and from Mitcham, was inspired to create the SwopItUp concept following a family holiday when she spent less than £30 on a whole new wardrobe at an Italian market filled with stalls piled high with pre-loved clothes.

She said: "Before that experience, as a growing teenager, I had found myself regularly buying new clothes, trapped by the cycle of fast fashion, which made it cheap and easy to buy new things. I have always loved clothes and style, but going to this market showed me that there are alternative ways to shop. Not only is it even cheaper, but buying pre-loved clothes is good for the environment as it reduces waste.

"This whole experience turned me into an advocate for pre-loved fashion. When I got home, however, I realised that there was nothing really aimed at my age group. It made me determined to give my peers an easy way to get pre-loved clothes with the added benefit of doing something good for the environment."

SwopItUp has other goals for schools, including linking the projects to different curriculum subjects such as geography, business, entrepreneurship, design, media, photography, technology, textiles and maths.

The skills that the project team develop by being a part of SwopItUp can also help provide them with a great start for employment, as well as understand more about the type of work activities that might appeal to them.

SwopItUp events have already taken place at Ricards Lodge High School in Wimbledon. The concept has also been running in neighbouring Wandsworth, and it is now expanding to other secondary schools with support from the RSA and the London Community Foundation.

Zaqiya said: "My goal is to have 25 schools on board with SwopItUp by the end of 2021 and soon after become a national, or even international, scheme.

"Since coming up with the idea for SwopItUp I feel I can call myself an environmental activist. I have taken action not only to reduce my own carbon footprint but to also provide others with a way to reduce theirs too. Once people start to take small steps with environmental action they are more likely to take the bigger steps.

"I don't believe that it will take a handful of people to work tirelessly to stop the climate crisis, it will take everyone to be more mindful about how their actions make an impact on the world. We need to work together if we are going to have any chance of solving this problem. SwopItUp is not just a clothing exchange, it is a concept that empowers youth to take real action."