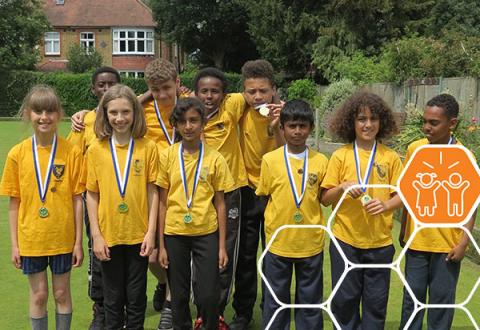 Children and young people have told us they are mostly positive about their social and community experiences in Merton, but air quality and litter needs improving, while traffic was a key concern for them.

Young people reported that access to public transport is a challenge - especially that buses were often overcrowded.

Merton becomes a place where children and young people don't feel they belong and where they feel excluded from communal spaces. Regeneration programmes don't consider the needs of young people in their designs, restricting where they can go and denying them the benefits of getting outside their home and meeting friends.

If we don't improve air quality around the areas where children grow up, there is an increased risk of them developing significant health issues such as lung cancer and Chronic Obstructive Pulmonary Disease as they grow up.

Merton will be a place where children and young people feel they belong and thrive.

Through partnership work, young people will be involved in environmental design, including the development of youth friendly spaces.

Air quality will be improved around youth friendly spaces and schools.

Improved access to the Local Offer, which provides support and services for children and young people in Merton with special needs.

Success would also increase broader awareness of the available range of opportunities for children and young people.

Merton's young residents don't have a strong sense of belonging to their community, according to our 2018 Children and Young People (CYPP) survey. It showed the following:

A survey of those leaving care revealed that 23% of Merton Care Leavers have low well-being. (The Bright Spots survey, 2018).

Around a quarter of children and young people surveyed were 'always' or 'sometimes' lonely. (CYPP Consultation, 2019), highlighting the lack of social networks to make them feel that they belong.

To make Merton a place where children and young people feel they belong and thrive, we will:

If you are working directly with children and young people - You can help by:

If you are delivering services to any residents in Merton - You can help by:

If you are a child or young person - You can help by:

The ambitious project, featuring a new community heritage interpretation centre, a café next to Madeira Hall, a new playground and comprehensive re-landscaping of the grounds, is due for completion in 2021.

Canons House itself will have its façade restored as well as some of its rooms, with the majority of the interior being converted to office space for local businesses.

The local community has been at the heart of the four-year project, with a range of opportunities for people of all ages to get involved. Events so far have included:

Mitcham resident Chelsea, aged 15, took part in the workshop to create ideas for the new playground. She said: "I think the playground is a fab idea, and I'm looking forward to seeing it when it is completed.

"There aren't an awful lot of things for children to do round here, young or old, so a newly-designed playground will be really good for the young ones and families to spend quality time with each other. It is also a good idea as it is close to The Canons Leisure Centre.

"The playground workshops themselves were great as they were very entertaining and fun. The lessons were arty and enjoyable, and I'm glad I was able to take part in the workshops - it has made a lovely memory."

The Kicks programme started with four pilot projects, at Tottenham Hotspur, Manchester City, Fulham and Brentford. It has engaged more than 300,000 young people at hundreds of venues across the country. Sixty-nine professional clubs in the Premier League and English Football League (EFL) are now supported to deliver the programme via the Premier League Charitable Fund.

Here in Merton, Kicks is run by Fulham Foundation, led by Paul Smithers and a great example of how this has benefited the borough is the session that runs on a Monday night at Harris Merton where Police Community Support Officer John Joseph, otherwise known as JJ, is a regular presence. He is the Community Ward Officer for Pollards Hill, and has been awarded the British Empire Medal for using his skills as a football coach to work with vulnerable young people.

The project has led to many positive results that have been of benefit to the young people involved, the community and the Met Police. When asked for his thoughts, JJ went on to say the following:

"Historically, when out on the streets, youths don't really want to engage with officers in uniform, but because I have had the opportunity through Kicks to actually work with them and spend some quality time with them, now they just see me as JJ, as someone they can talk to, someone they can trust."

Premier League Kicks has worked with the police service since it began as a pilot project in 2006. For more about JJ's work with the project, click on this video link.

By involving officers in the programme as mentors and advisors, Premier League Kicks encourages positive community relations by breaking down barriers between young people and the police.

"Having a police officer attending, it makes everyone feel comfortable," says one Kicks participant at Pollards Hill.

"It makes young people feel like police officers are human as well. If it wasn't for Kicks, I would probably be getting in trouble on the streets."

Fulham FC Foundation runs sessions, such as Kicks, elsewhere in Merton – including Lavender Park Kicks and Girls Raynes Park Kicks. These give young people an opportunity to be off the streets and in a managed, learning and supportive environment for most of the week.

They also run a number of after schools activities across the borough, not only at Pollards Youth Club, but at schools such as Harris Merton, where they run an engagement programme for girls under the Kicks umbrella.

In addition, the PASS/Kicks programme on a Monday is a great example of what happens when partners come together. Here the New Horizon Centre, Fulham Foundation, MOAT Housing and the Met Police work together to effectively create and deliver a project that works.

The Kicks programme is always open to new ideas and referrals, please contact them at kicks@fulhamfc.com.